Having joined SHARE with Schools as a coordinator at the start of my master’s degree in ancient history, I’ve helped deliver several of our workshops at different schools. However, it was a completely different ball game adapting and expanding one of them to deliver at the university’s Step-Up Plus Summer School.

The Summer School is part of the widening access initiative ‘University for All’ and is designed to encourage talented year 12 pupils from disadvantaged areas to apply to university. The scheme gives them a taste of university life – they live in halls with student ambassadors, go on trips around the local area, and attend sessions on academic subjects that aren’t always offered in schools.

So when the opportunity to deliver a SHARE with Schools workshop and represent the School of History, Archaeology, and Religion at one of the sessions came up, I jumped at the chance.

After exchanging a few emails with the widening access officer, I decided to deliver our Romans in Wales workshop. We normally deliver this to year 7 and 8 pupils in one hour lessons so I had to adapt and extend it to make it suitable for a 2 hour session with 17 year olds. I did this by changing the language used in the presentation, altering activities that had been colouring-based, and introducing a section on curse tablets based on the example found in the nearby town of Caerleon.

When it came to delivering the workshop, I have to admit that I was rather nervous – I’d never done one by myself so I was in unknown territory. But the pupils were all polite and attentive and I soon settled into it.

After running through the presentation on the Romans in Wales and the Iron Age Welsh, we started on the first activity of the day – making curses. I showed them the Caerleon Curse and explained the basics of curse making, deities, and Roman cursive and then handed out the worksheets.

The worksheets had the basic structure of curse tablets, a list of gods and goddesses often invoked in British curses, and an example of the Roman cursive alphabet. I had considered making them do it in some simple Latin and having them fill in the blanks in a template curse but as it was the last day of the school year and none knew any Latin, I decided to go easy on them and do it in English.

The pupils were quickly engaged with the work, asking questions about Latin and pointing out some of the seemingly unconnected roles that certain gods held. Nearly all of them decided to write their curses in the Roman cursive, often calling out for alternative letters to use, as there are a number that we use today that were missing. The majority also had a go at writing backwards, which was thought to increase the potency of the magic. After finishing their curses several rolled up their sheets so that only the deity invoked could see them.

We then had a quick discussion about what archaeology is and how it can be used before I handed out the artefacts.

Although the replica Roman sword and helmet – normally a huge hit at our workshops – were away with another project, the students quickly set about interacting with the objects and trying to work out what they were.

While they worked with the items, I went around the room helping them decide what each one was and talking to individual pupils about ancient history, archaeology, and university in general. We even got onto the subject of Roman loos after one student asked if Roman flagon fragment, originally part of a vessel used to serve wine, might have been used for more unsavoury purposes.

The group soon worked out what each object was and discussed them amongst themselves. Noticing a pause in activity, I went around the tables asking them which were their favourite artefacts. Most said the wax writing tablet, which they had all had a go using. I took the opportunity then to talk to them about the wood and ink based tablets found at Vindolanda.

Several other students said that they preferred the various animal bones and expressed an interest in studying archaeology at university. We discussed the type of information bones can give us, which seemed to only further their interest in the subject.

Once everyone had finished with the artefacts, I asked if anyone had any questions about university and university life and encouraged them to stay behind if they didn’t want to ask in front of everyone before sending them off to their next activity. A couple of pupils stayed behind to ask about the career prospects of doing a history degree and with the help of a student ambassador I put their minds to rest that you can do much more with history than you might think.

After the session the student ambassadors, who had been with the group for the entirety of the summer school, told me that the students had really enjoyed the session and that they hadn’t said that after all of them. Coupled with the fact that one pupil had told me that they intend to apply for ancient history here at Cardiff, I think the workshop went really well! I look forward to working with SHARE with Schools and delivering more workshops in the future. 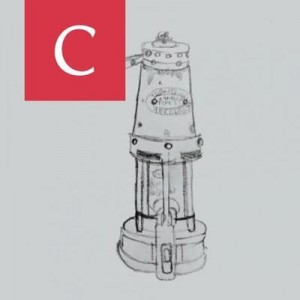 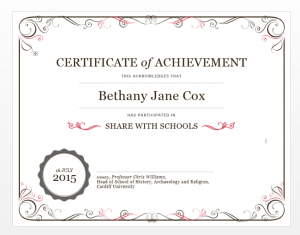