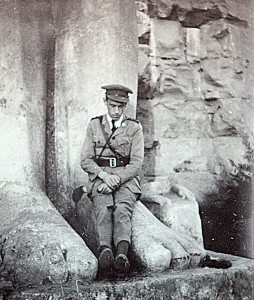 British officer relaxes at one of many Egyptian monuments

Our online archive presenting the images collected by the project is available at:

We are processing images collected from our donors and will continue to add more to the archive as they become ready.

We are pleased to announce that Cardiff University has received a grant from the Heritage Lottery Fund for the collection of images of Egypt and Palestine during the First World War.Our aim is to collect photographs taken by service personnel, postcards, lantern slides and stereoviews. We are not collecting the actual views but rather scans of them which, with the owners permission, will be uploaded to a dedicated website where anyone interested in seeing what their ancestors saw or who is interested in how the ancient monuments, cities, towns and villages looked during the First World War can get that information.

Much of the commemoration of the First World War has focussed on the Western Front and so gives the impression that the war was entirely one of mud and trenches with very little movement. However, the war in Egypt and Palestine was much more mobile and often fast moving, it was also fought in hot and dry conditions and posed a whole range of challenges to those who fought there. It is also a surprise to many that such a great number of personnel did actually serve in Egypt and Palestine at some point during the war with units regularly being withdrawn from the Western Front to serve in the area before returning to Europe later on. Egypt also served as a staging post for the Dardenelles Campaign and Thessalonika.