At present, it is still not known exactly what the nature of the cross-links is, and precisely where they occur within the extracellular matrix. Theoretically cross-linking could occur not just between collagen molecules but also between collagens and proteoglycan core proteins.

Zhang et al. [1] have studied interactions between the various constituents of the extracellular matrix, both in isolation and within the tissue. It was evident that collagen could not only cross-link with itself but also with two proteoglycan core proteins – mimecan and decorin.  The core proteins could cross-link to themselves but the attached sulphated glycosaminoglycans (keratan sulphate and chondroitin sulphate) were not involved in cross-linking.  Interestingly, after cross-linking, decorin appeared to form distinct dimers rather than large aggregates like the other proteoglycan core proteins.

Swelling studies have shed light on the location of cross-links. In an in vitro study, Wollensak et al. [2] demonstrated that cross-linked pig corneas placed in a humidity chamber swell less than untreated corneas. However, the deturgescent agent dextran is normally included to limit swelling caused by the riboflavin, and it was not clear whether the altered swelling properties were caused by the presence of dextran within the cross-linked tissue or whether it was due to the cross-links themselves. In a more recent study in which corneal buttons were allowed to swell freely in saline solution (and consequently leach proteoglycans and riboflavin solution from the tissue), no difference was found in the swelling rate of riboflavin/UVA treated, riboflavin-only treated, or untreated corneas [3] suggesting the absence of significant collagen-proteoglycan cross-linking.

Hayes et al. [3] also showed that cross-linking does not increase the bulk separation between adjacent collagen molecules within fibrils. This, together with their swelling results, led the authors to conclude that cross-linking predominates within and between molecules on the fibril surfaces, and within proteoglycan core proteins in the interfibrillar space [3]. If the latter is the case, it may be that the term “collagen cross-linking”, so often used to describe cross-linking, is in fact an incomplete description of the mechanism. 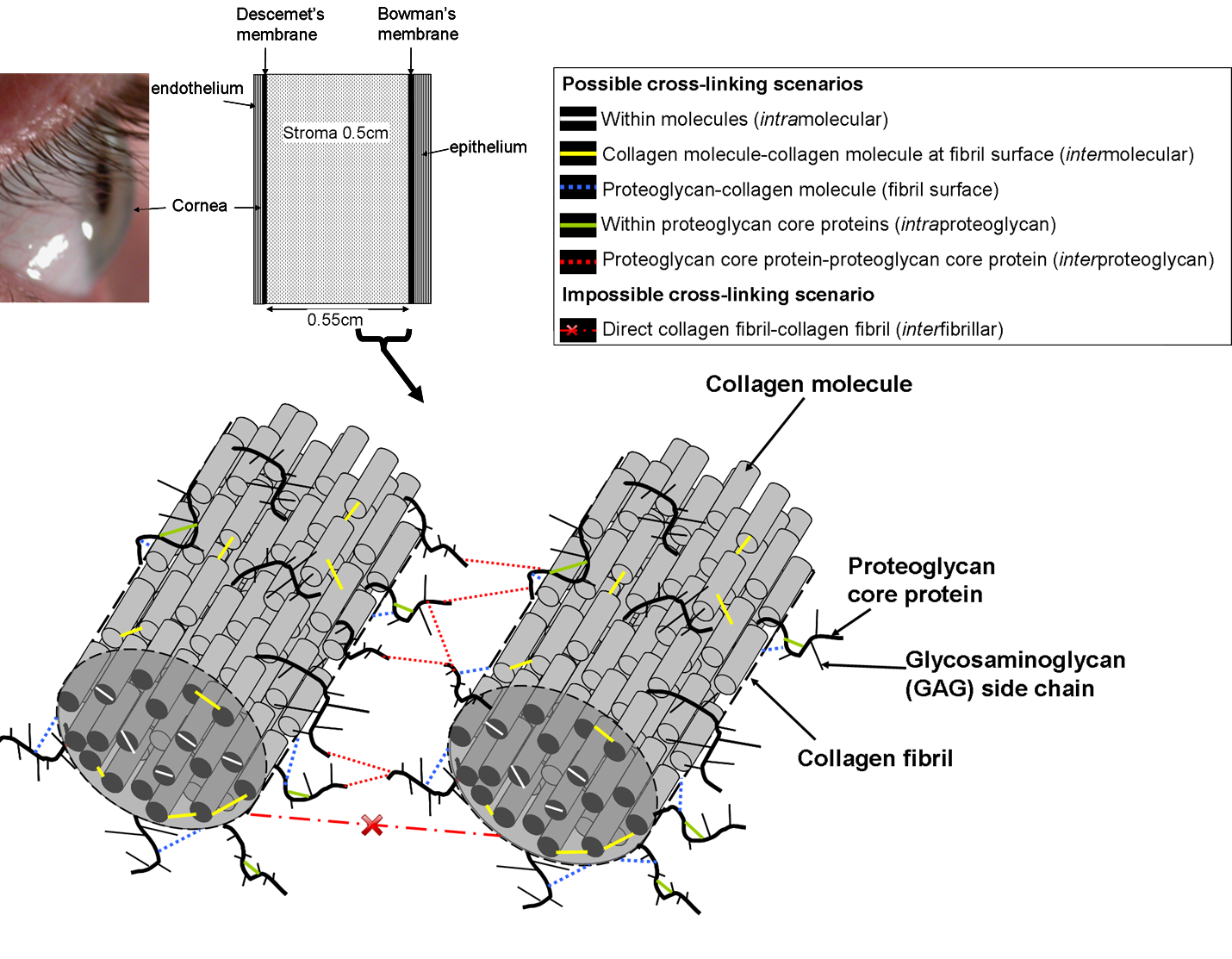 [1] Zhang Y, Conrad A, Conrad G. Effects of Ultraviolet-A and riboflavin on the interaction of collagen and proteoglycans during corneal cross-linking. The Journal of Biological Chemistry. 2011;286(15):13011-22.