In order to overcome the problems of postoperative discomfort, potential for delayed epithelial healing, infection, stromal haze, and corneal melting sometimes associated with the standard cross-linking procedure, researchers are investigating modifications to the procedure that will allow the same stiffening effect to occur in the corneal stroma without the need for epithelial removal. Some studies have claimed good results when cross-linking is carried out with the epithelium left intact (or following partial epithelium disruption), however these findings are controversial as in vitro studies in pig corneas have shown that riboflavin penetration through the intact epithelium is minimal [1] and is patchy if the epithelium is partially disrupted [2]. Therefore, improvements to riboflavin administration through transepithelial riboflavin delivery methods are required.

Several methods of trans-epithelial cross-linking have been proposed in which the anti-swelling agent dextran is typically omitted on the basis that its high molecular weight may inhibit the penetration of riboflavin solution across the epithelium. In these procedures, chemical agents, are added to the riboflavin solution to loosen the tight junctions of the epithelial cells and thereby facilitate passage of riboflavin into the stroma without the need for epithelial removal.

Another method under consideration is iontophoretic delivery of riboflavin, whereby a low intensity electrical current flowing between a negatively charged delivery electrode placed on the cornea and a counter electrode (placed on the patients forehead) is used to drive riboflavin across the intact epithelium and into the corneal stroma. 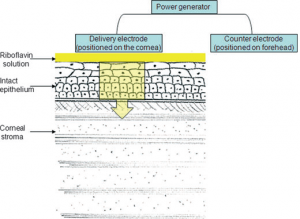 Schematic showing iontophoretic delivery of riboflavin into the corneal stroma.

Although transepithelial cross-linking by the above methods undoubtedly offers patients a faster and less invasive treatment than can be provided by the standard technique and facilitates the treatment of paediatric and uncooperative patients as well as those with thinner corneas (nearing 380μm), its effectiveness remains uncertain.