MEDOW has attended the following events:

IEEE International Energy Conference, EnergyCon 2016, Leuven, 04 – 08 April 2016, including papers by Jayachandra Sakamuri and Robert Renner and am outreach activity in the form of a Special Session on Offshore Wind and HVDC Grids with Friends of the Supergrid.

14th International Workshop on Large-Scale Integration of Wind Power into Power Systems as well as on Transmission Networks for Offshore Wind Power Plants , Brussels, 20 – 22 October 2015, including papers by Kevin Schönleber and Jayachandra Naidu.

10th Annual CIGRE Canada Conference on Power Systems
Winnipeg, Canada, 31 August – 02 September 2015, including a paper on A New Coordinated Voltage Control Scheme for Offshore AC Grid of HVDC Connected Offshore Wind Power Plants by Jayachandra Naidu (DTU).   Jayachandra can be seen in the photograph on the final page of this excerpt from the CIGRE ELECTRA journal. 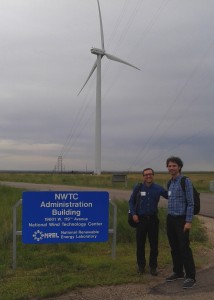 2015 IEEE Power & Energy Society General Meeting
Denver, US, 26-30 July 2015, including a paper on Frequency Support from Modular Multilevel Converter Based Multi-Terminal HVDC Schemes co-authored by Marc Cheah and pre-conference presentations of MEDOW to the US government’s National Renewable Energy Laboratory (NREL) and to the University of Denver by Rodrigo Teixeira Pinto and Oriol Gomis. 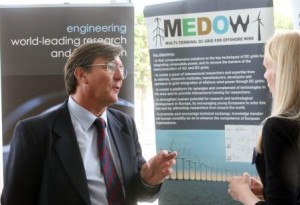 Vision2020 Network – Energy Cluster Inaugural Meeting
Cardiff, UK, 22-23 July 2015. MEDOW took part in an exhibition as part of the first meeting of the Energy Cluster.  The focus of the meeting with the EU’s Horizon 2020 ‘Secure, clean and efficient energy’ work programme.  The European Commission, a large number of leading EU universities and many renewable energy innovation companies were represented at the meeting.

The 23rd International Conference and Exhibition on Electricity Distribution
Lyon, 15-18 June 2015.  MEDOW partner EFACEC will exhibit at the event and will distribute information about MEDOW.

Friends of the Supergrid working session on supergrid related projects
Brussels, 7 May 2015: Prof Dirk Van Hertem represented and presented MEDOW at this workshop led by Friends of the Supergrid.  The aim of the workshop was to gather information on what research is taking place in Europe which will contribute to the future European supergrid at technical, regulatory and policy levels.

13th International Workshop on Large-Scale Integration of Wind Power into Power Systems as well as on Transmission Networks for Offshore Wind Power Plants in Berlin, Germany, 11-13 November 2014, including a paper on Multi-infeed control of VSC-HVDC transmission system for offshore wind power plant integration given by Muhammad Raza (UPC)

Workshop at Institute of Electric Energy Systems and High-Voltage Technology (IEH) at Karlsruhe Institute of Technology (KIT)
Karlsruhe, Germany, 10 November 2014, with a presentation on the MEDOW project in Barcelona by Kevin Schönleber